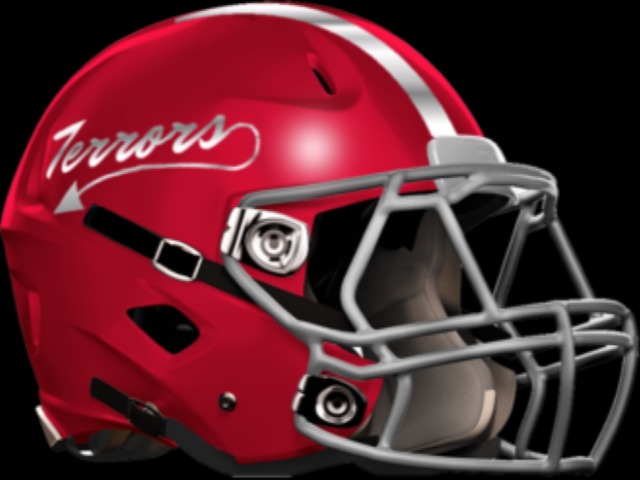 Tweet
By Kevin Price For GCS Athletics The Glynn Academy Red Terrors dropped their fourth straight game Wednesday night as they fell 31-14 to Effingham in a Region 2-AAAAAA game at Glynn County Stadium. The league contest between the Terrors (2-4 overall, 0-2 region) and Rebels was originally scheduled for Friday night but was moved up two days so the game could be played before the local area is possibly pounded by wind and rain from Hurricane Ian over the next couple of days. Glynn County Schools will also be closed for the remainder of the week. The Terrors started the season with back-to-back victories over Statesboro and McIntosh County Academy at home. They lost their final two non-region games to Camden County and Creekside before dropping last week’s City Championship Game against Brunswick which also was the team’s first region game. Against Effingham, poor tackling which led to big gains and turnovers proved costly for the Terrors. “Our kids played hard tonight, but we’re just not performing,” said GA head coach Rocky Hidalgo. “That’s it, we just have to get better. We can’t do any more tackling. There are no more tackling drills that we can do. Eventually, we just have to go out there and tackle. And, we just can’t turn it over. You can’t turn the ball over.” The Rebels finished with 441 yards and were led by fleet-footed quarterback Nate Hayes. The junior finished with 99 yards on eight carries. The team’s featured running back - junior Jayden Evans - followed with 78 yards on 17 carries as Effingham rushed for 216 yards. Hayes passed for 225 yards as he completed 12 of 20 attempts. Effingham’s first play was a pass from Hayes to senior receiver Keion Wallace, a college prospect, that went for an 80-yard touchdown. The victory was the fourth in a row for the Rebels (4-2, 2-0) who lost their first two games of the season. Effingham won big last week over rival South Effingham to kick off its region schedule. The Terrors finished another frustrating night with 156 yards rushing and 101 passing for 257 total yards. Peacock led Glynn with 95 yards rushing on eight carries. He did have 112 yards on the night before losing 17 yards on his final two carries of the game. Senior quarterback Tyler Devlin followed with 44 yards rushing on 14 carries. Through the air, Devlin was 5-of-14 for 101 yards. He was intercepted three times. The Terrors opened the game with an impressive first drive as they marched 67 yards in 5 plays, scoring on an 11-yard keeper by Devlin. Peacock had runs of 15 and 18 yards on the quick drive and Effingham was also called for a late hit on Peacock after one of his runs which gave Glynn 15 free yards as well. The 7-0 lead was short-lived, though, as Hayes hit Wallace along the Glynn sideline with Wallace getting away from the defense as the Rebels quickly answered. The score remained 7-7 until the Rebels finished off a 12-play drive with Hayes scoring on third-and-goal from the 8-yard line early in the second quarter. The Rebels went up 21-7 late in the opening half on a 28-yard run by Hayes. He had a 58-yard touchdown pass wiped out a few plays earlier due to a holding call. Glynn missed a chance to possibly pull closer before the halftime break. The Terrors got inside the Effingham 10 on a pass from Devlin to Prince whose fumble was recovered by the Rebels inside the 5. However, Effingham roughed Devlin on the play, so Glynn kept the ball and got an automatic first down at the 11 after the penalty against the Rebels was walked off from the original line of scrimmage. But, Glynn’s scoring bid ended with an interception by the Rebels in the right corner of the end zone. The Rebels drove inside GA territory on their last possession of the first half, but missed a f47-yard field goal as time ran out on the clock. After halftime, Glynn forced an Effingham punt on its first possession of the third quarter. When GA got the ball for the first time in the second half, Peacock paraded for 63 yards to the Effingham 3. A penalty and a lost-yardage play put Glynn back on the 14. Following an incomplete pass, the Terrors misfired on a second-down pass as well, but Effingham was penalized for pass interference. Peacock then lost a yard on third down from the 7, but on fourth down Devlin threw a pass to the left corner of the end zone that Prince pulled in as he was being covered to make it a 21-14 game. The Rebels got a 24-yard field goal on their following series to move the score to 24-14 late in the third. Later in the third quarter, Glynn turned over the ball on downs to the Rebels at their own 29 when Effingham stopped a Devlin run on fourth-and-1 from the 29. The Rebels had to settle for a field-goal try that failed at the start of the fourth, so the score remained the same. However, Effingham intercepted a pass along its sideline on Glynn’s first offensive play following the miss to get the ball right back. The Rebels quickly scored after taking over at the GA 36. A first-down running play picked up 25 yards, and two plays later, Evans scored from 11 yards out to give the Rebels the 31-14 final margin after the extra-point kick. Glynn is secheduled to play a region game at South Effingham next Friday night.
Back To News
GCS
Staff | 9/28/2022
PRIVACY POLICY | © 2022 MASCOT MEDIA, LLC