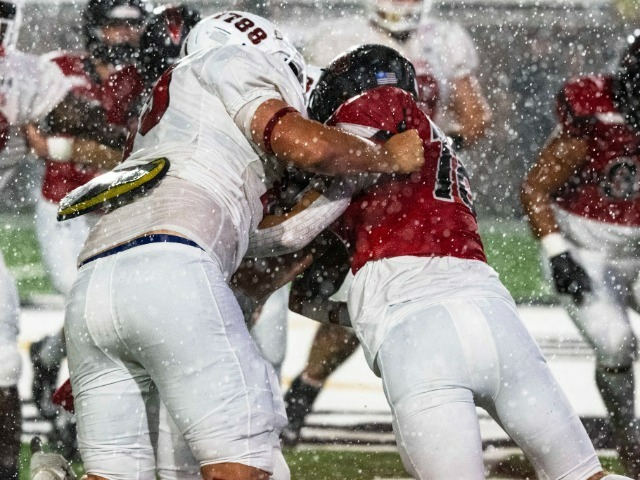 Tweet
By Kevin Price For GCS Athletics Glynn Academy lost a tough one Thursday night in the inaugural Border Classic as the Red Terrors fell 21-20 to Creekside (Fla.) at rain-soaked Glynn County Stadium. The Terrors (2-2) missed a late field goal that possibly would have won the game, and the Knights (3-0) ran out the remaining time to escape with the victory in a game that was played in a driving rain for most of the night. The win by the Florida school made for a split between Georgia and Florida on the opening day of this first-time event which is featuring seven games over three days between Southeast Georgia and Northeast Florida teams. McIntosh County Academy won big in the opening game on Thursday as the Buccaneers toppled West Nassau 42-8. The Glynn-Creekside game, set for a 7:30 p.m. start, didn’t kick off until almost two hours later because it was delayed by severe weather which included lightning. The teams had taken the field for warm-ups following the completion of the first game, but both the Terrors and Knights had to return to their locker rooms to wait out the storm. The fans also had to come out of the stands because of the serious weather threat. The Terrors actually led the game 20-7 at halftime after falling behind early, but Creekside capitalized on two third-quarter turnovers by the Terrors, scoring 14 unanswered points to regain the lead. “We turned over the ball twice and you can’t do that,” said a dejected Rocky Hidalgo, Glynn’s head coach, following the game. The first second-half turnover by Glynn was a fumbled punt snap which Creekside recovered at the GA 25-yard line. The Knights would cover that distance in three plays, scoring on 12-yard run by Nick Williams with 6:38 to play in the third period. The extra-point kick made the score 20-14. Glynn started its next drive at the Creekside 39 following a squib kick and a penalty against the Knights. But a fumble by the Terrors quickly gave Creekside the ball right back. On the very next snap by the Knights, Williams, a true workhorse for his team which repeatedly handed him the slippery ball during the game, broke free for a 59-yard TD run which gave Creekside the 21-20 lead after the extra-point kick. Williams carried the ball 23 times for 224 yards and scored all three touchdowns for the Knights. He came into the Border Classic averaging just over 122 yards after the team’s first two games of the season. Creekside missed a 33-yard field goal early in the fourth quarter, leaving Glynn in position to need only a field goal to regain the lead it had lost. With 9:45 to play, Glynn took possession at its own 20 and methodically drove the ball inside Creekside territory before converting on fourth-and-2 from the 37 to keep the drive alive. Davonte Lang took a direct snap and carried for the 2 yards needed to get a new set of downs. Glynn got the ball down to the 13, aided by two penalties accounting for 20 yards against the Knights. Facing a fourth-and-1 from there with just over two minutes to play, the Terrors tried to draw the Creekside defense offsides, but ended up calling a timeout when that didn’t happen. Out of the timeout, Glynn lined up to attempt a 30-yard field goal for the lead, but senior Kody Arnold’s kick was off the mark. “It was the right decision to do as a head coach,” Hidalgo said of trying for the field goal there. When Creekside took over, Glynn could only stop the clock once with its third timeout which it called after the first-down snap by the Knights. On the next snap, Williams padded his rushing numbers as he busted loose through the middle and didn’t get chased down until he had gained 64 yards to the Glynn 17. Creekside’s quarterback kneeled down from there as the final seconds rolled off the clock. The game started in a hard rain, and immediately the Terrors lost huge yardage and the ball on a fumble at their 33 after taking the opening kickoff. Creekside took advantage of the first of three turnovers by Glynn in the game, going the 33 yards in seven plays with Williams scoring from 8 yards away for the early 7-0 lead. Glynn capitalized on good starting position when it got the ball late in the opening quarter at the Creekside 13 after the Knights’ punter was ruled down as he tried to field a low snap back to him. Lang scored for Glynn to tie the score at 7-7 in the closing seconds of the first period. Glynn went up two scores in the second stanza. Lang scored from 5 yards following a 47-yard gain by Peacock who fumbled at the end of his run with Chandler Owens recovering the ball for the Terrors at the Creekside 7. Peacock scored on a 9-yard run for Glynn late in the first half to cap a 9-play, 48-yard drive. He finished with 75 yards on 11 carries. Lang added 56 yards on 15 attempts for Glynn while Hank Noonan carried 5 times on Glynn’s last drive for 25 yards. The playing conditions forced both teams to simplify their offenses, and neither side attempted many passes. The Terrors had planned to run more option-game, according to Hidalgo. “We couldn’t pitch the ball and deal it,” he said. “There was a bunch of stuff we couldn’t do to get the ball on the perimeter. But they couldn’t run their offense either. “Their kids played hard. We made some mistakes. There were some times we took plays off, and it cost us big time. It was an ugly night.” Glynn will be off next week. The Terrors will open Region 2-AAAAAA play on Sept. 23 in the annual City Championship Game against rival Brunswick High.
Back To News
GCS
Staff | 9/9/2022
PRIVACY POLICY | © 2022 MASCOT MEDIA, LLC